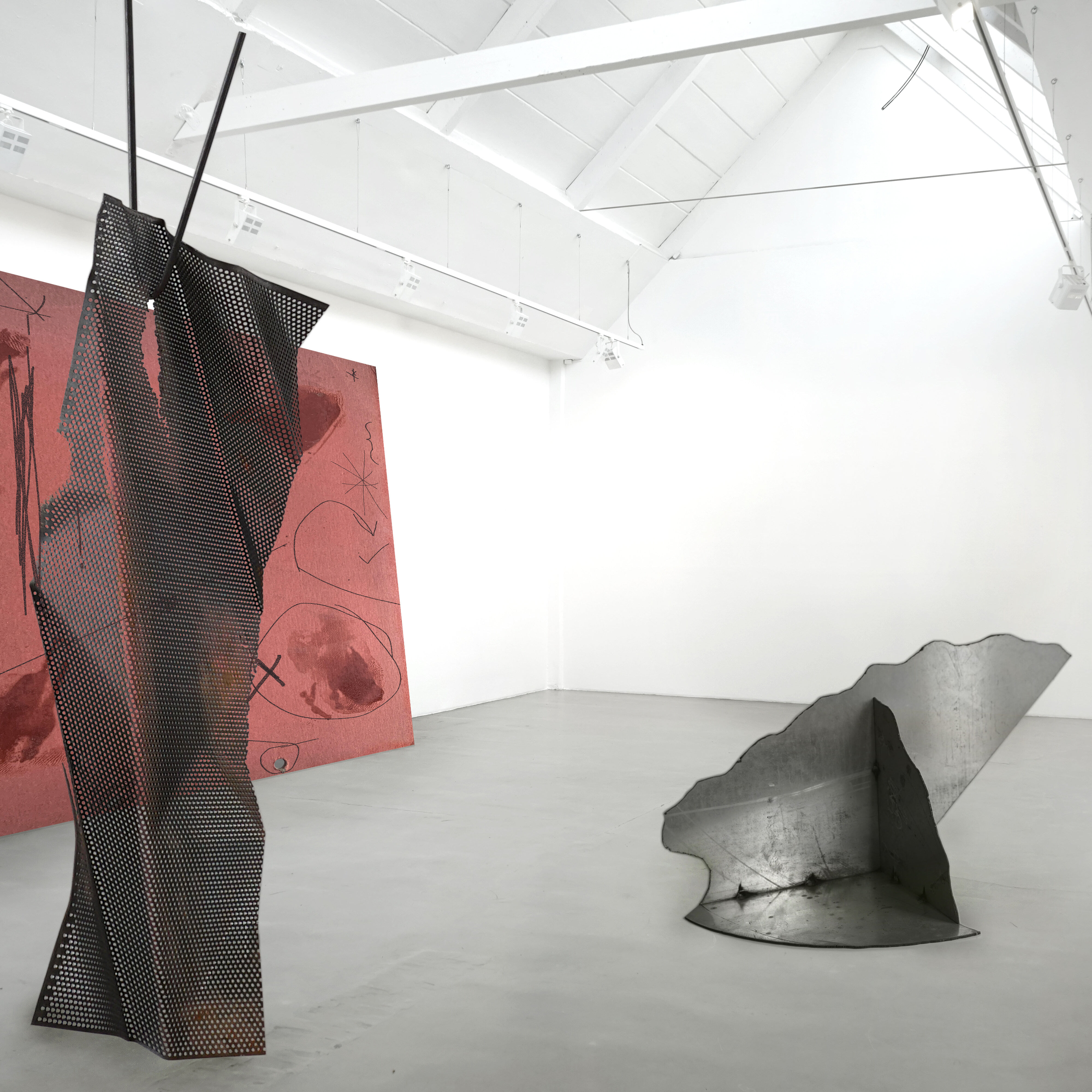 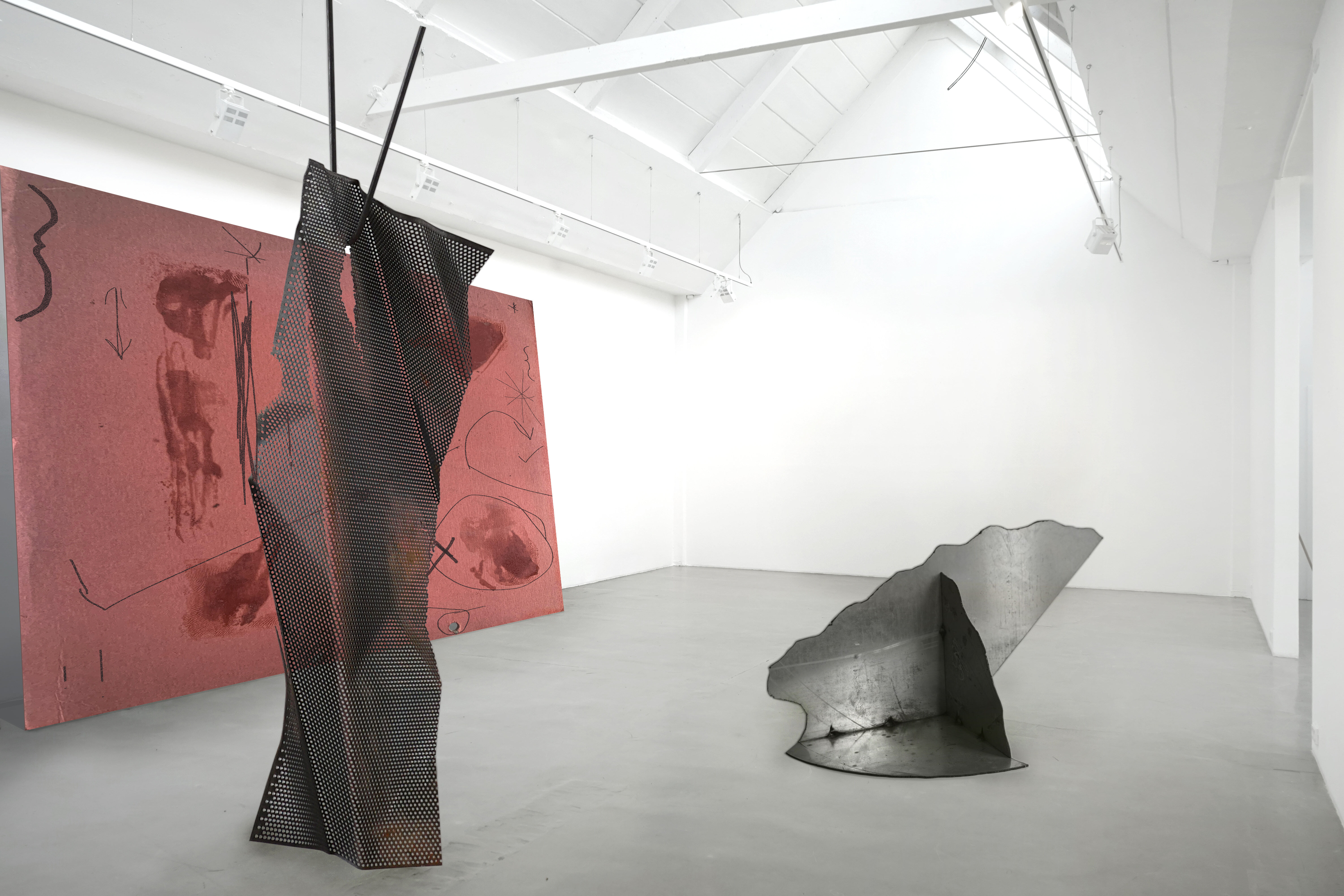 Large-scale folded and dyed cardboard screens fabricated from layered sheets of paper in the colours of architectural drawings – cyan, magenta and sepia, are conceived by the artists Sarah Entwistle and Paul Kuimet as a figurative re-scaling of the architectural archive of Clive Entwistle, grandfather of Sarah Entwistle. The screens act as a spatial scenography for a series of works on paper and steel sculptural objects. The surface of the screens is treated with hand drawn grammatical notations such as ticks, crosses, question marks and hashtags, also borrowed from the archive. With this monolithic re-scaling these symbols take-on an expletive directness and urgency.

Shown together with the screens are a series of works on paper by Entwistle. Using original architectural reprographic prints from the archive the artist has partially submerged the original drawing with blooms of marbling ink. The drawings depict details of the roof structure for the ‚Transportation and Travel Pavilion‘, New York World Fair, 1964. The pavilion designed by Clive Entwistle was articulated by its large spherical roof, imagined as a representation of the moon’s surface replete with craters and texture. Concurrently to designing this project C.E was drafting a screenplay entitled ‚Harvest Moon‘, which explored, through the narrative guise of a love story, druidic imagery and feminine mythologies of the Harvest Moon. The moon, recognised as an astronomical body aligned with the female cycles and mythological deities is here reclaimed, and as with other aspects of her practice these works of vandalism attempt a spiritual repatriation of the female narratives and energies held both within the archive and more broadly in her ancestral line.

Anu Vahtra’s works investigate found spatial situations. Initiated by the architectural characteristics as well as historical and contextual background of a certain site, they often focus on the exhibition format and specifics of an exhibition space but also tackle issues of public space. Vahtra composes both physical and photographic space as if through the camera, bearing in mind distinct vantage points. What’s important is that the focus of attention is not so much on what her work depicts but rather on how it relates to and is displayed in a specific space.

Untitled (Double over), a series of four black and white photographs created for Galerie Barbara Thumm’s New Viewings, is a result of printing, folding and scanning the images of the empty gallery space. The attempt to bring back the third dimension in a two-dimensional representation of the space suggests an alternative spatial narrative and contributes to Vahtra’s ongoing exploration into site-specific space-oriented problematics. In the exhibition space, the series is juxtaposed with photographic fragments of the space, plotted life-size, and wallpapered directly on the wall.

Anu Vahtra has participated in numerous group exhibitions internationally, and has had solo exhibitions in Amsterdam, Brussels, Budapest, Cologne, New York, Prague and Tallinn. She has been nominated for the Kristjan Raud Prize (2015) and the Sadolin Art Prize (2014); in 2015 she won the Köler Prize 2015 grand prix, and in 2017 received the Annual Award of the Cultural Endowment of Estonia’s Foundation for Fine and Applied Arts. In 2017 Vahtra was an artist in residence at the International Studio and Curatorial Programme (ISCP) in New York, where she produced a new performance piece for the Performa 17 Biennial. Currently lives and works in Brussels where she is an artist in residence at the WIELS Contemporary Art Centre. She is also one of the founders of Lugemik Publishing (2010) and Bookshop (2013) in Tallinn.

A Brief History of Scaffolding / SE Screens juxtaposes photographs from Kuimet’s ongoing series of photographs with the yet to be realized screens/space dividers developed in collaboration with Sarah Entwistle. A detailed image of a scaffolding is somewhat like the smallest structural unit of the modern real estate economy, a temporary and modular element that appears and disappears in every modern city as quickly and inconspicuously as the movement of capital that assembles the scaffolding in the first place. As with the physical screens made of steel and paper, the photographs’ materiality is emphasized by them being presented unmounted and unframed.

Paul Kuimet’s works with photographic installations and 16 mm films, the subject matter of which ranges from landscapes and architecture to autobiographical objects and works of art. Obliquely addressing capitalism and its structure and modus operandi in which we are all immersed, Kuimet visually and aurally presents social and cultural values of our days through a-temporal details and fleeting moments.