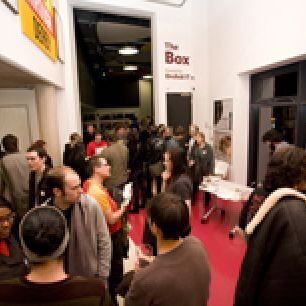 A 6-session series offering an insight into contemporary art production. Each session featured a presentation from leading thinkers/writers or artists that examined the themes and issues through case studies and current thought, then opened up to debate within the audience. Art:Debate cross-referenced art with several other aspects of life such as economy, the market, politics, geography, participation and cinema, and addressed artists/curatorial practice (i.e. how exhibitions and biennials are developed, how artists make a living, how government influences cultural production, etc.)

1. Art and Everyday (Thursday January 29th 2009): How could a light switch be a work of art? We understand the meaning of situations and objects because of our knowledge and cultural background. Some artists transform the identity of a functional, everyday object through an imaginative use, or by putting it in a new location or context.

2. Art and Participation (Thursday February 12th 2009): In what ways could art affect a citizen's life? And a non-citizen? What are the strategies for engaging audiences across a city, region or nation? What is the agenda beyond commissioning an art work, a performance, a public project, or a project in public space? Who chooses who, and what is the role/benefit for the citizen? What is participatory art?

3. Art and Politics (Thursday February 26th 2009): What can art bring to a person in terms of political change, or awareness that has a political influence? Is art in political, social, cultural terms revolutionary or evolutionary? What has the &lsquo;political art&rsquo; from the 1960s onwards (social criticism, political video and film, actionism, propaganda etc.) produced that has nowadays a relevance? What can be a future scenario for art and politics?

4. Art and Market (Thursday March 12th 2009): What is the value you place on a work of art if it is not made by its author? Artists have rejected the traditional forms of making art and created art made from everyday objects, or plainly outsourcing services and artefacts: do they find new ways of saying things to provoke new thoughts?

5. Art and Cinema (Thursday March 26th 2009): What has been, and has become, the relation between the moving image industry and the contemporary art world? In which way has art influenced the idea of film directors, the budget of film producers, and the expectation of audiences? Or is it more the case of the film industry influencing art productions?

6. Art and Festivals (Thursday April 9th 2009): To date, there are 146 art biennials around the world (only a minor part in Europe or USA) + film festivals, photo festivals, international forums, touring exhibitions, new media conventions, music and sound festivals, literature festivals and artist-in-residency programmes. What does all this circuit of knowledge produce in terms of economical, historical, geographical and informational terms?