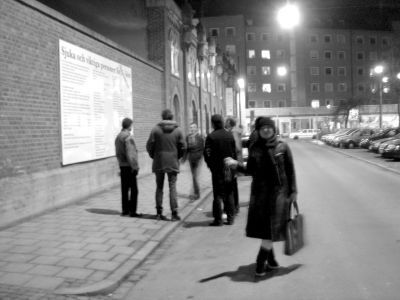 In connection with the exhibition "Normalization" in Rooseum Center for Contemporary Art Malmö (Sweden), Critical Studies group presented the project Priority List on Rooseum’s billboard at Gasverksgatan. The project consists of a fragment from a so-called priority list — a government directive as to the allocation of resources to different groups in society in case of a crisis. A priority list is based on suppositions of who is the most useful for the continued functioning of the rest of society. The project Priority List casts light on this hierarchy, focussing on those who are at the bottom of the ladder. – – – Critical Studies 2005–2006: Kyongfa Che, Alfredo Cramerotti, Övül Durmusoglu, Minna Henriksson, Christian Hillesø, Jee-Eun Kim, Christian Schult.