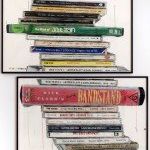 WAGSTAFF'S takes as its point of departure a piano and musical instrument dealership of the same name that occupied the current MOSTYN building in the years prior to its being reinstated as an art gallery in the 1970s. Originally based in Manchester, Wagstaff's relocated to number 1 Vaughan Street in Llandudno in the early 1940s after the city store was demolished during World War II, and in 1946 it moved to number 12, site of MOSTYN, Wales today. The establishment of music shops such as Wagstaff's in the late 19th century reflected the high regard in which music was held in terms of entertainment inside and outside the family home. Many of these shops have now gone out of business due to changes in both technology and family leisure pursuits.

WAGSTAFF'S considers the long-standing connection between music and art, and records an interpretation from today&rsquo;s perspective. A number of the artists featured in the exhibition have previously appeared together in shows which have surveyed the linkage between the genre of music and the field of art. In this sense, the exhibition suggests some of music&rsquo;s most embraced and debated facets; the cover version, the copy, and the culture of bootlegging. The exhibition is presented within a format made up of four categories, taking inspiration from independent music record shops, which would categorise music by genre and which, along with musical instrument shops, have decreased in number. The categories are designed to give structure to the wide array of approaches and usages of music in the visual arts, many of which are presented in the exhibition. The format also allows opportunities for overlaps and mixes to be played out between the categories, and the artworks presented within.

This exhibition is part of MOSTYN's History Series which, since 2013, has examined the heritage of MOSTYN's building, the town of Llandudno and links further afield. The series has presented historical artefacts and images alongside works by contemporary artists, thus forming a dialogue between past and present. This exhibition is curated by Adam Carr, (Visual Arts Programme Curator, MOSTYN), with historical research by Jane Matthews (Engagement Manager/Research, MOSTYN) and Richard Cynan Jones (Operations and Facitilies/Research, MOSTYN).