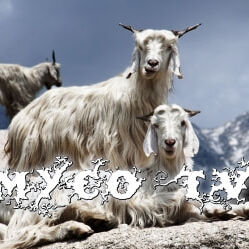 MOSTYN presents the next of our digital events, part of our EDGE digital programme funded by the Arts Council of Wales: The Mycological Twist: Myco TV Daily: Monday 15th - Friday 19th June 2020, 6pm - 8pm BST (GMT+1) MycoTV is a TV programme led by the Mycological Twist, a project led by Berlin-based artist duo Eloise Bonneviot and Anne de Boer in collaboration with artist Leslie Kulesh. This second iteration of MycoTV is developed in partnership with MOSTYN.

18:03 - Lola Olufemi what will you sacrifice? quick. Quick.
"with thanks to Christina Sharpe, Jose Muñoz, Ernst Bloch and The Out of the Woods Collective for providing thinking to be built on, contested, turned upside down.”
18:15 - Clay AD Call in...
19:00 - Dylan Huw Syntrap
Click here to watch this episode

information on all contributors:

This programme was developed prior to the current Black Lives Matter protests happening around the world. We do not wish to distract from the important actions and conversations happening in support of the movement. We have decided to go ahead with the programme as we believe it will provide useful points of discussion and tools towards this important movement, through its focus on issues of care, solidarity, community and activism. The programme will include a contribution by local community activists Dr. Sibani Roy and Lee Tiratira who are doing important anti-racist work in North Wales.