Hannah Quinlan and Rosie Hastings’ first solo institutional exhibition develops the artists’ inquiry into the politics, histories and aesthetics of queer spaces and culture. A new film highlights the impact of gentrification upon the city and its gay communities, whilst also exploring the relationship between masculinity, capitalism and power within the urban landscape. Wall rubbings of the stone relief that fronted the recently closed Bar Jester are presented as works on paper in the exhibition alongside a major new fresco painting, depicting a high street populated by pedestrians. At a time of extreme and ongoing austerity, heightened surveillance and the privatisation of public spaces, the street is an increasingly contested and political zone. 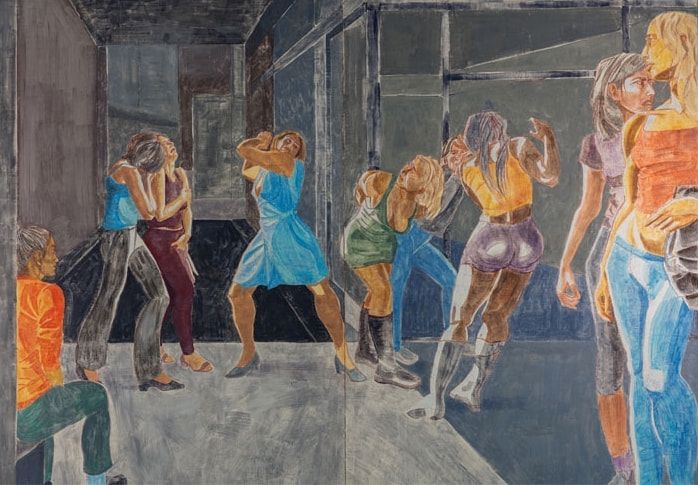 Hannah Quinlan and Rosie Hastings’ first solo institutional exhibition In My Room brings together film, fresco painting and works on paper. As a new body of work, In My Room develops the artists’ inquiry into the politics, histories and aesthetics of queer spaces and culture. This inquiry builds on their travels across the UK whilst making ‘UK Gay Bar Directory (UKGBD)’ 2016, a moving image archive of gay bars, responding to the systematic closure of LGBTQ+ dedicated social spaces. To Quinlan and Hastings, it became apparent through this research that the gay scene caters predominantly to white gay men. This prompted them to consider how this scene strengthens the historic male access to capital and power within the urban landscape.

Wishing to explore the question of access further in their new film, Quinlan and Hastings went location scouting in Birmingham’s gay village, only to find that in fact many of the bars and clubs have recently closed or will close in the next few months, due to the area being rapidly redeveloped as luxury residential accommodation in anticipation of the new high- speed rail line. This gave the film – and Quinlan and Hastings’ ongoing wider archival project – a new urgency to capture these historical LGBTQ+ spaces at a time of immense change, thereby highlighting the impact of gentrification upon the cultural substructures of a city and its gay communities.

In conjunction with the archival impulse of the film, Quinlan and Hastings have used dance and the performing body as a way to think through and investigate the ways in which male interaction and power are consolidated, particularly in relation to male sex culture. The film is set in three different locations: Bar Jester and the Core club in Birmingham and Shoeburyness Fort in Southend-on-Sea. Recently closed, Bar Jester had been open since the 1970s, transitioning from a predominantly men-only venue in the 1980s to a women- upstairs men-downstairs layout, and then into a mixed venue. The Core club is a members- only, men-only venue which hosts monthly club nights: it will close in the coming months. The third location, Shoeburyness Fort, was used by the British School of Gunnery as a training and experimental base for the army since 1859, then re-armed during World War 2 as part of the coastal defence, but now in disuse. Another form of a male-only environment at that time, the imposing, yet desolate Fort is flanked by the Thames Estuary one side, and by a recently built housing development on the other.

Within these three locations, the camera focuses on the strict routine of the line dancing format which is performed by the dancers without any emotional connection to the music or communication with each other. In contrast, a specially choreographed shadow dance (a derivative of the line dance) allows for a much more charged mirroring of the dancers’ bodies, whose interaction becomes intensely intimate and at times, almost violent. The film suggests a subconscious reproduction of power in public space through codes, gestures and behaviour. Wall rubbings of the stone relief that fronted the Bar Jester appear as a repeating motif throughout the film. These unique works are also presented on paper in the exhibition. A ghostly record of an iconic LGBTQ+ venue at the moment of its passing, the Jester takes on a life of its own as a folkloric and governing character. Three smaller graphite drawings, shown in the entrance cabinet, depict the exteriors of gay venues in Birmingham, all of which have either closed already or are scheduled for closure before 2021, in front of which small groups of women congregate.

Quinlan and Hastings have also created a new fresco painting, bringing this specialist, ancient technique into contemporary practice by engaging with the public and architectural nature of the medium. Depicting a high street populated by pedestrians, this imagery considers the role urban architecture plays in the formation of identities, and reflects on the ways in which movement is informed by a culture of male dominance. At a time of extreme and ongoing austerity, heightened surveillance and the privatisation of public spaces, the street is an increasingly contested and political zone.

Rosanna Mclaughlin has been commissioned by Focal Point Gallery to write an accompanying essay, ‘Now You See Me’. Please see her essay in full here.