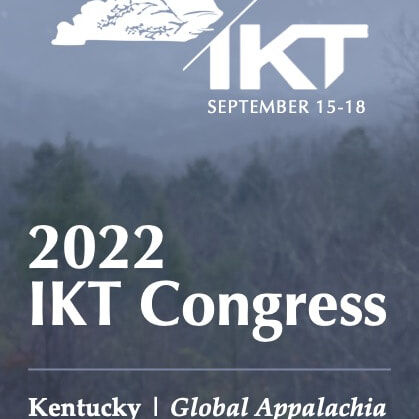 Global Appalachia is a term that refers to a real, increasingly “global” geographical and cultural region in the United States, and to the realities of recalcitrant geographies—geographies that have persisted across political regimes and therefore might model a kind of resistance (even if they are also always threatening regression).

After two years of lock-downs and other social restrictions, IKT Congress 2022 is an opportunity for us to once again gather in person, to share and exchange ideas with each other, and to learn about the art ecology of the region that is hosting this event.

As well as exploring Louisville’s vital and active visual arts scene, we will also travel to the neighboring cities of Lexington, Kentucky, and Cincinnati, Ohio. Our program will include visits to important museums and exhibition spaces in each city, as well as visits to artists’ studios, art school facilities and two significant private contemporary art collections. The main public event of the Congress is the symposium “Global Appalachia,” which will bring together a diverse range of artists, writers, and curators to discuss ideas and concerns of place and home in a regional and global context, as well as to consider the pressing topics of environmental degradation, racial injustice, and toxic philanthropy.

Although often represented in a monolithic and disparaging way, Appalachia is a dynamic and diverse region defined by mountain peaks and river valleys, barriers and flows, range and depth. As the “backbone” of the United States, Appalachia stretches from northern New York state to Georgia, fueling the nation with resources and labor. Appalachia is also called the “black bone” of the nation, to stress the integral contributions of African Americans to a region often mis-characterized as white.

But more than a geographic space, Appalachia is a cultural space. As Affrilachian poet Nikky Finney writes, in order to understand Appalachia, we must account for its “human geography” because “any portrait of land worth its salt must also include a landscape of its people worth its weight in blood, sweat, and tears.” This includes people of color and white people, indigenous peoples and immigrants, northerners and southerners, rural and urban dwellers, traditionalists and radicals—all of whom belong to a region that has been framed from the outside as backward, lacking, degenerate, separate, and “other,” despite the nation’s economic dependency upon it.

Over the decades, Appalachia has been systematically mined and marginalized, yet one can readily find parallels to other “hinterland” spaces all over the globe. Mineral and coal mining have polluted the environment not only in Appalachia but also in regions from Siberian Russia to the Amazon rainforests of Colombia and Brazil. The opioid epidemic that has ravaged our region has also decimated vulnerable populations in areas from Eastern Europe to Southern Africa. Meanwhile, the CEOs and shareholders of mining and pharmaceutical corporations whitewash their wealth through philanthropic causes which, in the case of the arts, enriches them further through the enhancement of private collections.

Since the 1980s, curators have used various metaphors for globalism to organize exhibitions: from an old model of “east and west,” to a map of trans-global “trade winds,” to a dispersed network of “platforms,” to an affirmative “archipelago” of the new world order. The IKT 2022 symposium proposes “Global Appalachia” as a term that both extends and intervenes in this ongoing conversation. “Global Appalachia” does not function only as a metaphor, it’s also a method rooted in the specificity of place. Focusing on environmental degradation, racial injustice, and toxic philanthropy, the symposium will explore how regional artists, activists, and curators confront these intersecting issues. Through the lens of this region, the symposium will think critically about problems and solutions that echo around the globe, aiming to foster a dynamic conversation that challenges stereotypes and outdated intellectual modes, and proposing new models for thinking about how art, curating, and activism of this region matter greatly to a global context.