The first AGM was a three-days performance event on the relationship between body and space. It took place October 2003 in Trento (Italy), hosted and supported by Sconfinart, a private partnership that organised an art expo in the former agricultural fair of the city of Trento. The theme of body and space reflected significantly the former destination of the fair site, where the body of the agricultural economy of the region for decades was exhibited through a showcase of animals, machines and farm products. Only recently the fair event relocated to a newer site.

Artworks and artists participating: 1) "Light" theatre-performance by post theatre group (Berlin/New York); 2) "Gypsum Make-up/Spaghetti/Belly Dance" performance by Nezaket Ekici (Turkey); 3) "ENTER.NET" performance by A. Cramerotti and I. Bentzen (Italy/Denmark). Co-curated with Iben Bentzen, with the support of Claudio Cavalieri and Paul Sark. More info and detailed at http://www.annualgeneralmeeting.net Images from left to right as above respectively. 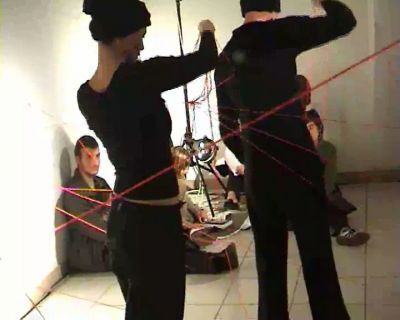